Inverted papilloma of nose and its management

Introduction: Inverted papilloma is a benign lesion occuring in the nasal cavity and paranasal sinuses. Eventhough these tumors are classified as benign they are known to cause local destruction, known to recur and also can under go malignant transformation to squamous cell carcinoma.

History: Ward in 1854 described the macroscopic features of papilloma of nose. He used the term papillomatous neoplasm to describe this lesion. Billroth in 1855 used the term villous carcinoma to describe inverted papilloma because of its propensity to destroy local tissues and recurrence after surgery. Hopmann in 1883 used the terms hard and soft papilloma to ascertain the stoma : epithelium ratio. This classification ofcourse was not useful because the number of epithelial layers varied within the various areas of the same specimen.
Ringertz in 1938 coined the term inverted papilloma after recognizing the characteristic endophytic growth pattern demonstrated by this type of papilloma. Kramer and Som in 1935 used the term genuine papilloma of the nasal cavity. Berendes in 1966 after taking congnizance of the destructive properties of this lesion used the term Malignant papilloma to indicate this mass. Hyams in 1971 classified nasal papillomas as inverted papilloma (to indicate papillomas with endophytic growth) and fungiform papilloma. He also included a third group cylinderical papilloma to accomodate the variantions seen in these papillomas. Batsakis in 1987 used the term inverted Schneiderian papilloma indicating its origin from the Schneiderian membrane (nasal mucosa). Michaels in 1996 regarded the three types of nasal papilloma as three completely distinct entities whereas Eggers in 2005 considered these three types of nasal papillomas as hybrid lesions.

Synonyms: As indicated above various synonyms have been used to indicate inverted papilloma of nose. They include:


Definition: The mucosal lining of nose and paranasal sinuses is known as Schneiderian membrane in memory of Victor conrod Schnider who described its histology. Papillomas arising from this membrane is very unique in that they are found to be growing inwards and hence the term inverted papilloma. These papillomas are unique in their history, biology and location. Papillomas involving the vestibule is not included in this group because histologically, biologically and behavior wise it is different.

You can download the e book by clicking at the image below. 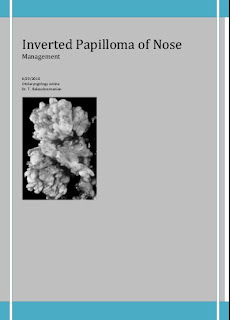 Inverted papilloma nose
Posted by Unknown at 5:58 AM 1 comment:

Introduction:
Rhinosporidiosis has been defined as a chronic granulomatous disease characterized by production of polyps and other manifestations of hyperplasia of nasal mucosa. The etiological agent is Rhinosporidium seeberi.
Theories of mode of spread:
Posted by Unknown at 7:01 AM No comments:


I have released an e book titled "OSCE notes in Otolaryngology" to cater to the needs of students who need to be trained in this particular facet of clinical examination.  You can download it by clicking at the picture below. 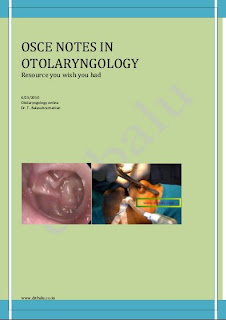 Posted by Unknown at 6:26 AM No comments:

Preauricular sinus and its management

Introduction:
This condition was first described by Van Heusinger in 1864. He also rightly postulated it to be congenital in nature. Most of these patients are symptomatic. Common symptoms include infections, cellulitis, and abscess formation infront of the pinna. Some of these patients may have recurrent infections leading on to embarassing discharge from the sinus. In most patients this condition is identified during routine examination involving ear, nose and throat.

You can view the e book from here.

Posted by Unknown at 3:19 AM No comments:

Causes of thyroid nodules include:

Tools of diagnosis as far as these thyroid nodules include: 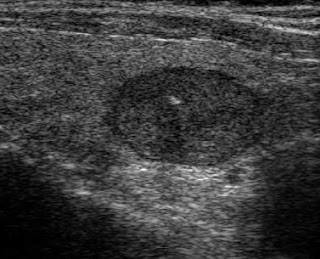 You can download the full  e book from here.
Posted by Unknown at 12:05 AM 3 comments:

Introduction:
Odiosoft rhino is an equipment used to measure the sound produced by nasal airflow. Measurement of nasal airflow sounds helps us to indirectly assess the presence / absence of nasal block as well as accurately identifying the site of the block. Normal nasal airflow in humans is neither laminar nor turbulent, but a mixture of both. Hence the term transitional is used to describe nasal airflow. Simple mathematical formulae cannot be used to study nasal air flow dynamics. At higer velocities of nasal airflow turbulence also increases. This turbulence creates sound which can be recorded by recording devices such as odisoft rhino.
Airflow within the nasal cavity is regulated by 4 valves:
Role of Fourier analysis in the study of nasal airflow:
According to Fourier the French scientist any complicated wave form can be expressed as a series of two or more simple sine waves and cosine waves.
Sound generated by air passing through nasal cavity can be recorded by placing probes containing microphone in the anterior nasal cavity. These recorded sounds are subjected to fast fourier transformation using the software called Odisoft rhino.
The recorded frequency spectrum could be classified into:

Procedure:
Before emarking on recording nasal sounds, the following things should be ensured:

This whole system can also be used as a web based diagnostic service, where a patient can be asked to use the probe and the recorded sound is transmitted through internet to the diagnostic server where these sounds can be analysed and diagnosis can be made.
Posted by Unknown at 2:27 AM 1 comment: