Nasal cholesteatoma is actually a misnomer. This is another name for Rhinitis caseosa. The term “Rhinitis caseosa” was coined by Duplay in 1868. Eggston and Wolff after a detailed study in 1947 concluded that this condition could occur secondarily following pent up secretions in the sinus cavities. Their studies revealed that this condition is more common in patients with extensive bilateral ethmoidal polyposis. The presence of polypi in the nasal cavities caused obstruction to the normal drainage mechanism of the paranasal sinuses. This led to accumulation of secretions. Whitish to yellow cheesy material were found within the nasal cavities of these patients behind the nasal polypi. This cheesy material also caused expansion of sinus cavities, erosion of bone and extension into orbit.
Could this actually be fungal infection? Now the consensus seems to be pointing towards this direction.

30 years old male patient came with complaints of:
1. Foul smelling discharge left nasal cavity - 2 years
2. Head ache on and off - 2 years
3. Watering from left eye - 1 year
Patient gave no history of nasal bleed.
He was not a diabetic 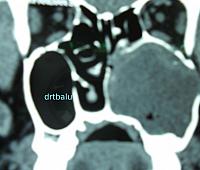 
Video clipping of the surgical procedure:

Posted by Unknown at 6:37 AM No comments:

Nasal polyposis is considered to be the end stage of mucosal inflammation. Nasal polyposis doesnt contribute siginficantly to the mortality, but causes a significant reduction in the quality of life of the patient. The development of nasal polyposis is associated with:

This article discusses the role played by Thymic stromal lymphopoietin in the pathogenesis of nasal polyposis.

Maturation of Helper T cells Type II is hastened by the presence of Thymic stromal lymphopoietin. These Helper T cells play a vital role in the pathogenesis of nasal polyposis.

Nasal epithelium secretes thymic stromal lymphopoietin. This protein binds on the special receptor on the surface of dendritic cells. This binding causes release of OX40 ligand. This OX40 ligand causes the helper T cells to mature. These mature helper T cells secrete IL-4 and tumor necrosis factor alpha which are the well documented inflammatory mediators which could lead to the formation of nasal polyposis. 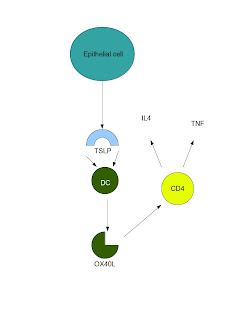 Introduction:
There are two types of staphylococcus aureus derived enterotoxins. In patients with nasal polyposis IgE antibodies to staphylococcus aureus enterotoxins A and B have been demonstrated. Now the definition of nasal polyposis has undergone a subtle change. It is now being referred to as chronic rhinosinusitis with nasal polyposis. This disorder is characterised by an eosinophilic T helper type II inflammation. IL-5 happens to be the driving force of inflammation in these patients. It is important to differentiate this disorder from chronic sinusitis without polyposis in which T1 helper cells mediated inflammation is seen. In this disorder gamma interferon and transforming growth factor beta are considered to tbe driving force of inflammation.
A short note on staphylococcus aureus:
Staphylococcus aureus has recognised as an important pathogen in various human diseases. Infections of this organism ranges from skin infections to enteric infections. This organism has been found inside the nasal cavity. Patients in whom these organisms are found in the nasal cavity can be divided into intermittent and persistent carrier states. Staphyloccous have been known to produce toxins. Staphylococcus aureus are capable of secreting super antigens. These superantigens helps the organims in evading the adaptive immune mechanism of the body. These superantigens can directly activate T cells via its ability to bind to the MHC class II molecule. Hence these super antigens need not be processed by the antigen presenting cells. Only when an antigen is processed by the antigen precenting cell the adaptive immune mechanism of the body can be kick started.
How nasal polyposis is formed due to the presence of staphylococcus superantigens like enterotoxin A and e.
T lymphocytes in response to the superantigens starts to proliferate. This proliferation is confined to the T lymphocytes bearing specific vβ domains. This significant clonal expansion of T cells bearing vβ domains is known as (vβ skewing). These T lymphocytes in turn causes increased production of IL-5. This causes oedema of the mucosal lining of the nasal cavity. Excessive and persistent oedema in turn leads to nasal polyposis. These superantigens also cause aspirin sensitivity due to its ability to upregulate eosinophilic inflammation.
Courtesy otolaryngology e news
Posted by Unknown at 6:04 AM 1 comment:

Role of mucin expression in the pathology of nasal polyposis

Introduction:
Rhinorrhea due to increased mucous secretion is one of the cardinal symptoms of nasal polyposis. Nasal polypi not only causes an increase in the amount mucin secretion but also changes its physical properties. It makes the mucin secretion thicker than usual hampering the normal mucosal transport mechanism. Changes in the physical properties of mucin involve changes in the relative amounts of sol and gel components. Nasal polypi expresses a wide spectrum of mucin genes. This genetic expression of mucin genes have been thought to play a role in the pathophysiology of nasal polyposis.
Causes of increased mucous secretion in patients with nasal polyposis:
1. Sinus infection coexisting / complicating nasal polyposis can cause increased mucous secretion. Studies have shown that 3 types of mucin have been expressed in these patients. They include MUC2, MUC5AC, and MUC5B. In patients with nasal polyposis there was inverse relationship between the levels of MUC2 and MUC5AC levels in the sinus secretion.
2. Increase in the surface epithelial area due to the presence of polypi could be one of the causes of increased mucous secretion. Even when squamous metaplasia is present due to exposure these squamous cells also express mucin.
3. Due to inflammation there is an increase in the number of mucous secretory elements like goblet cells / submucosal glandular cells. This could be due to the presence of increased levels of inflammatory mediators like IL-9, IL-13. These mediators increase the amount of secretion of mucin by goblet and submucosal glandular elements.
Mucin genes:
MUC1:
This gene has been demonstrated in normal inferior turbinate epithelium and nasal polypoidal tissue. Infact studies have not demonstrated any appreciable changes in this gene expression between these two tissue. One important issue that deserves mention is that this gene is found to be downregulated in the inferior turbinate of patients with vasomotor rhinitis when compared to normal individuals. This has led authors to postulate that decreased amounts of MUC1 expression in the mucosa over inferior turbinate some how trigger off neurogenic stimuli leading on to production of copious watery secretion from the nasal cavity. This feature is classically seen in patients with vasomotor rhinitis.
MUC2:
This gene is responsible for the production of large secretoy mucin. This mucin is commonly seen in intestinal epithelium serving to protect it from the luminal contents. MUC2 upregulation is seen in the mucosa of maxillary sinus in patients with nasal polyposis.
MUC 3 & MUC 6:
MUC3 gene encodes membrane bound mucin. This type of membrane bound mucin is seen in intestinal secretions. MUC6 gene encodes for secretory mucin which is commonly present in gastric secretions. It is this mucin which prevents self digestion of gastric mucosa by the HCL present in the stomach. Patients with nasal polyposis demonstrated MUC 3 upregulation with no increase in the amount of MUC6.
MUC4:
Studies have shown that this gene is the most predominantly expressed one in nasal polyposis. This gene is responsible for encoding membrane bound mucin which is commonly present in patients with nasal polyposis. This gene is also postulated to be involved in the process of epithelial hyperplasia and metaplasia.
A lot of work needs to be done in this direction to throw more light on this issue.
Courtesy news.otolaryngology.co.in
Posted by Unknown at 6:31 AM No comments: