Tonsillolith is a rare condition. Small areas of calcification are commonly seen while sectioning a tonsillectomy

specimen. Large calcified mass within the tonsil (tonsillolith) is a relatively rare phenomenon.

Pathogenesis of tonsillolith is still unknown. It has been attributed to recurrent infections of tonsillar tissue
and accumulation of infected material within the crypta magna. This accumulated material initiates foreign body reaction and dystrophic calcification. Tonsillolith may also arise due to stasis in the ducts of accessory salivary glands. This could commonly be caused due to obstruction to the ducts of accessory salivary glands due to post tonsillectomy scar tissue or infection.
Usually deposition of calcium salts (Calcium phosphate) occurs normally in the skeleton. When calcification occurs in soft tissues in an unorganized fashion it is known as heterotopic calcification. This heterotopic calcification can be further subdivided into three categories:

Idiopathic calcification: This condition refers to deposition of calcium in normal tissue despite normal serum levels of calcium and phosphate. Examples include chondrocalcinosis and phleboliths.

Dystrophic calcification: Is pathologic and usually occurs in degenerative and dead tissues. This calcification occurs despite normal serum calcium and phosphate levels.

Tonsillolith is usually an incidental finding. Patients may report

2. Pain in the thorat

Microscopy: Microscopic examination of the tonsillolith shows necrotic debris, ghost cells, calcifications and
inflammatory cells.
Tonsillolith may occur in any age group. Tonsilloliths are usually hard in consistency, may be single or multiple, may be round or oval, cylinderical or irregular pyramidal shape.

Usually tonsillolith contains minerals like carbonates and phosphonates of calcium. Other minerals like magnesium, sodium, silica, potassium, ammonia have been reported. 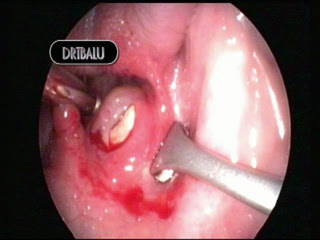 Video clipping showing tonsillolith being removed
Posted by Unknown at 5:51 AM 1 comment: