Septoplasty is the commonly performed surgical procedure these days. It has been evolving for more than a century. It was in the early part of 20th century Freer and Killian first reported this procedure. The technique developed by them involved removal of the complete nasal septum (SMR). It was left to Cottle to fine tune their procedure of submucosal resection of nasal septum. During initial stages due to fear of complications and constraints of illumination septal deviations involving the anterior and middle portions alone were corrected adequately. Posterior deviations were left unattended. With the advent of excellent equipments like the nasal endoscope the whole of the nasal septum can be visualised and this led to removal of excess septal cartilage leading to complications like septal perforation, flappy nasal mucosa and nasal deformities like saddle nose etc. Inspite of being nearly a century old procedure the concepts governing septal surgery has undergone very few modifications. Metzenbaum recognized the importance of caudal portion of nasal septum and was instrumental in devising the first principles of septoplasty. His swinging door technique is still being followed with minor modifications in the septoplasty procedure performed even now.


1. Ability to deal with all types of septal deviations
2. Preservation of cartilagenous support framework
3. Avoidance of complications


Before suggesting these modifications they conducted extensive studies on the biomechanics of septal deviation. In their study they identified three key stress lines in the nasal septum. These stress lines are:


The reasons for these stress lines can be accounted if the theory of differential septal ossification is considered to be the cause for septal deviation. 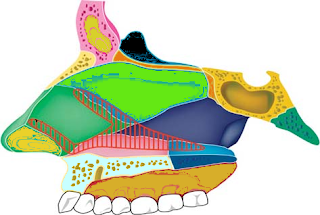 During the development of nasal septum uneven ossification of the various parts of the septum can occur. The developing nasal septum is supposed to contain a membranous component anteriorly and cartilagenous and osseous component posteriorly. The posterior portion of nasal septum ossifies and forms perpendicular plate of ethmoid, nasal crests of palatine and maxillary bones and the vomer. Studies have shown that the septal cartilage is still in the process of continuous growth even after full maturation of maxilla and palatine bones. Due to the space constraint the growing cartilagenous portion of the nasal septum buckles.
In the modified procedure of septoplasty suggested by Wang etal the septum is surgically accessed via the standard Hemitransfixation incision. The septal cartilage is freed from its anterior, posterior and inferior attachements. Only the superior attachment is intact ensuring that the septal cartilage does'nt fall off. The cartilage can be shortened in order to fit in to the space. The shortening of the cartilage causes the septum to straighten. Since cartilage is fractured in order to correct the deviation healing takes a little longer. Splinting of the nasal septum is a must atleast for 10 days for optimal wound healing to occur.
Advantages of this modified procedure:
Posted by Unknown at 6:15 AM No comments:

Drugs used in otology and their formulations

This is a video clipping showing Endoscopic vidian neurectomy being performed.


Anatomical studies have shown that the best place to insert the trocar in the canine fossa is at the junction of the mid pupillary line and a horizontal line drawn through the floor of the nasal vestibule. At this site a 5mm hole can very easily be drilled thorough which a 4 mm nasal endoscope can easily be passed. 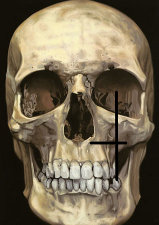 Illustration showing the exact location for placing the trocar in the canine fossa
Indications for canine fossa trephining:
Before proceeding with canine fossa trephining a large middle meatal antrostomy should be performed. A 70 degree endoscope can be used to inspect the interiors of the maxillary sinus cavity. This inspection will also help in grading the maxillary sinus disease.
Grade I – Normal or slightly oedematous mucosa
Grade II – Oedematous mucosa with small polypi without eosinophilic mucous
Grade III – Presence of extensive polypi and thick tenacious mucin
Anatomy of the canine fossa:
The canine fossa is the thinnest portion of the anterior wall of the maxillary sinus. Hence it is easy to breach this area and enter into the sinus. Boundaries of the canine fossa include:
The trephining of the canine fossa can be performed sublabially. After successful trephination using the trocar has been performed the opening can be widened using a burr. The opening should be wide enough to permit insertion of a 4 mm nasal endoscope. The maxillary sinus can be visualized from both angles i.e via the natural ostium using a 70 degree endoscope and via the opening in the anterior wall of maxilla. One port can also be used to introduce instruments to remove the diseased mucosa and pent up secretions.
Complications: Are very few if anatomy is respected.
Most of these complications are self limiting and resolve within the first week after surgery.

Introduction:
The human bony labyrinth is composed of endosteal, enchondral and perisoteal layers. The endosteal layer consists of bone lined with a single layer of cells that have numerous gaps separating them. This layer is significantly thin. The enchondral layer is rather unique in that it reaches the adult size by 23 weeks of gestatation and undergoes minimal remodelling after the age of 2. The periosteal layer is composed of lamellar bone and is capable of bone remodelling and repair.
Labyrinthitis ossificans is the pathologic new bone formation within the lumen of otic capsule. This condition is always associated with profound deafness and loss of vestibular function. Cochlear ossification in this condition doesnot cross the endosteal layer or alter the architecture of the enchondral bone.
Causes of labyrinthitis ossificans:
Commonly involved portion of cochlea in this condition is scala tympani portion of the basal turn of the cochlea. This is more severe in patients with bacterial meningitis. Infections from inflammed meninges reach the inner ear via the cochlear aqueduct. Usually the cochlear aqueduct drains into the scala tympani close to the round window region. This is the reason why predominant ossification of the inner ear occurs in this area following bacterial meningitis. This creates lot of problem during cochlear implant electrode introduction via the round window. This ossified area should be drilled out with a microdrill inorder to insert the electrode in these patients.
According to Paperella labyrinthitis ossificans can be divided into three stages:
Acute stage – This stage is characterised by pus which fills up the perilymphatic spaces, sparing the endolymphatic space. This is followed by the formation of serofibrinous exudate.
Stage of fibrosis – This stage is characterised by fibroblastic proliferation within the perilymphatic spaces which usually begins two weeks after the onset of infection. This stage is also associated with new bone formation (angiogenesis).
Stage of ossification – This stage is characterised by bone formation and is first observed at the basal turn of the cochlea.
Theories proposed to explain the pathogenesis of labyrinthitis ossificans:
Posted by Unknown at 10:49 PM No comments:


The sublingual and submandibular salivary glands are responsible for about two thirds of the basal saliva production. The parotid gland contributes to just a third of the basal salivary production. Destruction / trauma to chorda tympani nerve on both sides can definitly cause dryness of mouth due to a reduction in the amount of saliva secreted by sublingual and submandibular salivary glands. Usually sectioning of one chorda tympani nerve will go unnoticed. When middle ear surgery is contemplated on both ears then the patient should be warned of the realistic risks of xerostomia. Caution should be exercised in operating on the opposite ear of patients who have already undergone middle ear surgery in the ipsilateral ear.


Hence all otologists should take extra care to preserve this nerve during middle ear surgical procedures.
Posted by Unknown at 4:10 AM 1 comment:

Novel way of managing Little's area bleed in the nose

Many a time we would have faced problems cauterizing a Little's area bleed. This is basically due to the use of nasal speculum

which obscures the field and also keeps one hand occupied. Bray in his " How I do it" describes how he put to use the Mallet spint.
Procedure:
A Mallet splint is a common tool used to treat Mallet (Trigger) finger. This splint is available in different sizes. It can be cut and introduced into the anterior nares.
This keeps the nasal cavity open providing a good view of nasal septum area. It also has the advantage of leaving both the surgeon's hand free.
The most proximal part of the Mallet splint is cut and shaped into a "U" shaped splint. This splint can be readily inserted into the nasal cavity.
Since this splint is made of silastic, its memory holds the nasal cavity open.
Since both the hands of surgeon are free the bleeder can easily be cauterized either by electro or chemical cautery. Posted by Unknown at 1:29 AM No comments:

Physiology of deglutition a presentation

I have uploaded a presentation titled "Physiology of deglutition"


Physiology of deglutition
View more presentations from Balasubramanian Thiagarajan
Posted by Unknown at 6:11 AM No comments: