Posted by Unknown at 3:23 AM No comments:

The posterior wall of middle ear cavity (Tympanum) is also known as retrotympanum. Important anatomic structures are lodged in this area. This area has assumed significance because of the difficulties encountered in clearing cholesteatoma from this area. This area is so narrow and has lot of crevises, it is very difficult to clear disease from this area.
This area is supposed to contain 4 important recesses. Each of these four recesses could hide cholesteatoma causing the surgeon to leave residual disease which could later recur. Precise knowledge of anatomy of this region is vital for the surgeon who wants to clear disease from this area. The recesses present in the retrotympanic area are:

Pyramidal eminence is the most prominent anatomical landmark of this area. This eminence hold the pyramidalis muscle. There are other prominences arising from this area projecting in various directions. They include:

The 4 types of retrotympanic recesses are found under these eminences.

Sinus tympani:
This is the most common and constant depression present in the retrotympanic area. Anatomically this sinus is located at the junction of the lateral and posterior walls of the tympanic cavity. Phylogentically this recess is considered to ba analogue of bulla tympanica seen in mammals. It lies between ponticulus superiorly and subiculum inferiorly. This recess is bounded by pyramidal ridge externally and promontory internally. Visualization of this area during middle ear surgery proves to be a challenge. During yester years small angled mirrors known as zinne mirrors were used. Now angled telescopes serves this function rather brilliantly. The sinus tympani is known to extend posteriorly up to the round window niche.

Sinus tympani has been classified into three types depending on its depth. Note in type III it extends up to the level of lateral semicircular canal.

Proctor described this sinus in 1969. This sinus lies between three eminences of styloid prominence. These eminences include:

Posterior sinus of middle ear cavity is one of the recently identified anatomical sinus inside the middle ear cavity.
Serial temporal bone dissections have shown that it is present in nearly 90% of dissected bones.

Position: It lies just posterior to the oval window.

In nearly 60% of dissected specimen a ridge of bone arising from the floor of middle ear cavity separates it from sinus tympani.

In 8% of dissected specimen, the sinus tympani and posterior sinus merged together to form one confluent sinus.

It has been demonstrated that cholesteatoma / granulation tissue may lie within this sinus making removal difficult leading on to residual disease.
Retraction pockets may also occur close to this area.

This recess lies between the promontory and tympanic annulus. It is bounded medially by the facial nerve and laterally by tympanic annulus. Running between these two structures at varying angulations is the chorda tympani nerve. Chorda tympani nerve always runs medial to the ear drum. Drilling in this area between the facial nerve, annulus and the angle formed by the chorda tympani nerve will lead into the middle ear cavity without causing a breach in the ear drum. This approach is used in cochlear implant surgery to place the electrode in the round window area. Hypotympanum can also be approached through this approach.

This is the posterior extension of promontory separating oval and round windows.

Rarely a spicule of bone arises from the promontory above the subiculum and runs to the pyramid on the posterior wall of the middle ear cavity. This spicule of bone is known as the ponticulus.

Submission of articles to online journal of otolaryngology

Online journal of otolaryngology has been started.  It is free to access and free to publish.  You can read / submit articles to this journal by going through a simple registration process which is free.  Articles submitted will be peer reviewed before publication.  Publication of selected articles is absolutely free.

Click on the image below to read a short tutorial on article submission to this journal. 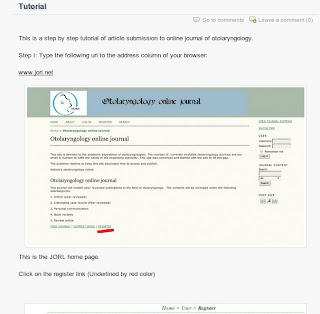 The important basic function of larynx is to provide sphincteric protection to the lower airway. This is achieved by adduction of vocal folds in response to stimulation from the internal division of superior laryngeal nerves. This mechanism is initiated by complex brain stem response which is polysynaptic in nature. This reflex is sensitive to variations in body core temperature. In febrile neonates, a hypersensitive glottal closure reflex have been known to cause sudden infant death syndrome.

Role of animal studies in verifying this hypothesis:

Posted by Unknown at 3:18 AM No comments:

Velopharyngeal insufficiency and its management

velopharyngeal_insuff
Posted by Unknown at 11:19 PM No comments:


Mandibular Swing
Posted by Unknown at 4:12 AM No comments:

Grommet insertion Current conceptsIntroduction: Myringotomy with grommet insertion was introduced by Poltizer of Vienna in 1868. He used this procedure to manage “Otitis media catarrhalis”. Soon it became the common surgical procedure performed in children. Indications: Bluestone and Klein (2004) came out with revised indications for grommet insertion which took into consideration the prevailing antibiotic spectrum. 1. chronic otis media with effusion not responding to antibiotic medication and has persisted for more than 3 months when bilateral or 6 months when unilateral. 2. Recurrent acute otitis media especially when antibiotic prophylaxis fails. The minimum episode frequency should be 3/4 during previous 6 months / 4 or more attacks during previous year. 3. Recurrent episodes of otitis media with effusion in which duration of each episode does not meet the criteria given for chronic otitis media but the cumulative duration is considered to be excessive (6 episodes in the previous year) 4. Suppurative complication is present / suspected. It can be identified if myringotomy is performed. 5. Eustachean tube dysfunction even if the patient doesnt have middle ear effusion. Symptoms are usually fluctuating (dysequilibrium, tinnitus, vertigo, autophony and severe retraction pocket). 6. Otitis barotrauma inorder to prevent recurrent episodes. Problems with Grommet insertion: This procedure is not without its attendant problems. Common problems include: 1. Segmental atrophy of tympanic membrane 2. Tympanosclerosis 3. Persistent perforation sydrome (rare) Before treating patients with otitis media with effusion the following factors should be borne in mind. Pneumatic otoscopy should be used to differentiate otitis media with effusion from acute otitis media. Duration of symptoms should be carefully documented. Children with risk for learning / speech problems should be carefully identified. Hearing should be evaluated in all children who have persistent effusion for more than 3 months. Grommet insertion can be performed under local anesthesia. Incision is made in the antero inferior quadrant of ear drum. The incision is given along the direction of radial fibers of the middle layer of ear drum. This causes minimal damage to the radial fibers. It also enables these fibers to hug the grommet in position.

Introduction:
Myringotomy with grommet insertion was introduced by Poltizer of Vienna in 1868. He used this procedure to manage “Otitis media catarrhalis”. Soon it became the common surgical procedure performed in children.

Bluestone and Klein (2004) came out with revised indications for grommet insertion which took into consideration the prevailing antibiotic spectrum.

This procedure is not without its attendant problems. Common problems include:

Grommet insertion can be performed under local anesthesia.
Incision is made in the antero inferior quadrant of ear drum. The incision is given along the direction of radial fibers of the middle layer of ear drum. This causes minimal damage to the radial fibers. It also enables these fibers to hug the grommet in position. 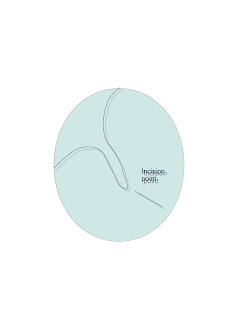 Introduction:
Management of vestibular schwannomas has undergone lots of changes during the past decade.  Review of published literature exemplifies this fact.  Various currently available management modalities to treat this condition are:
1      Observation
2     Stereotactic radiosurgery
3     Microsurgery
Among these three modalities stereotactic radiosurgery is evincing keen interest because of the precision of the procedure and lesser incidence of side effects.  Advances in imaging technology have enabled early diagnosis of these lesions.  About a decade back the sensitivity of imaging techniques used to identify lesions measuring 30 mm.  Recent imaging modalities are accurate enough to identify even lesions measuring less than 10 mm.  A stage has reached when surgeons are managing more intracanalicular lesions than ever before.
The current management modality of these tumors focusses on:
Preservation of hearing
Preservation of facial nerve functions.

Observation / Watchful waiting:  This modality is preferred in managing patients with small asymptomatic / minimally symptomatic intracanalicular tumors.  Since tumor doubling time of these lesions is prolonged (1-2 mm / year) this method warrants a trial.  Advantages of this method are preservation of hearing and facial nerve function in these patients.  Studies have also revealed that growth rates between intracanalicular and extracanalicular tumors are not significantly different.  It is ideal to perform imaging at least twice a year within the first year of diagnosis and once a year from there on.
Positive features that could warrant this management modality include:
1      Excellent speech discrimination scores
2     Growth rate of less than 2.5 mm / year

Microscopic surgery:
This is indicated for small intracanalicular lesions with vestibular symptoms.  Amount of tumor growth also is one important factor that could force the hands of a surgeon.  Growth rate of more than 3mm / year is an indication for surgical intervention.  Hearing can be conserved by using retrosigmoid / middle cranial fossa approach.

Posted by Unknown at 9:00 AM No comments:

Susac syndrome was first described by Susac etal in 1979. This syndrome is characterised by rapidly progressing encephalopathy, blindness and hearing loss.

This is actually an endotheliopathy affecting precapillary arterioles. This endotheliopathy could probably be immune mediated. This causes rapid tissue infarction which leads to these problems.

Women are commonly affected than men. Typical vulnerable age group is between 20 – 40.

Rituximab is the currently used drug in the management. This is a monclonal antibody against CD20 protein. This receptor protein is found on the surface of B lymphocytes.
Posted by Unknown at 12:06 AM No comments: