Sonotubometry and its role in assessing functional integrity of eustachean tube 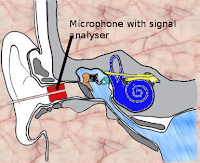 Diagram showing the placement of microphone in the external canal to record the transmitted sounds.
Advantages of sonotubometry:
Pitfalls of sonotubometry device:
These pitfalls were overcome by using inflatable nasal seals that would prevent leakage of sound from the nose and the use of pneumatic valve on the meatal microphone. This pneumatic valve would ensure that the external canal is sealed properly and there is no leakage of sound from it.
Regarding the frequency of test sound that should be used it has been demonstrated that frequencies between 6-8 kHz usually produced the best results. It has also been determined that frequencies of 5 kHz usually could be mistaken to that of physiological noises produced due to the act of swallowing.
Procedure:
The test is usually performed by placing a pneumatic microphone inside the external canal and a nasal sound probe which could generate sound at frequencies ranging from 6-8 kHz. Patient is asked to take about 20ml of liquid and hold it inside the oral cavity. When the sound is projected via nasal probe the patient is asked to swallow the liquid. This act of swallowing will open the normally functioning eustachean tube and is considered to be normal if the sound recorded at the external auditory canal reaches the level of 4dB sound pressure level. The duration of the eustachean tube opening can be calculated as the time difference between the onset of increase in the amplitude of sound and the return to its baseline. 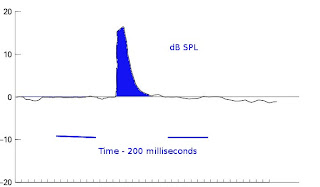 Figure showing the sonotubometric curve. SPL reaches the peak level at the external canal 16 dB at 500 milliseconds. The base of the triangle formed by the curve is the time which eustachean tube is kept open. By looking at this curve eustachean tube functional abnormalities can be identified.