Retropalatal region is the common site of obstruction in most patients with obstructive sleep apnoea syndrome. Uvulopalatopharyngoplasty (UPPP) has been used with reasonable degree of success to treat these patients. Powel etal introduced this procedure of triangular uvulopalatal flap technique to achieve the same result. This procedure has the additional benefit of reducing the width of the soft palate significantly. This procedure has lower morbidity and risk when compared to UPPP.

An incision is made about 1 cm behind the posterior end of hard palate. A triangular flap is created over the palatal mucosa as shown in the figure below. Dissection is performed between the submucosal adipose tissue and the underlying muscular tissue. Triangular shaped posterior pillar mucosa near the base of the uvula is excised. The triangular mucosal strip is carefully dissected and removed exposing the underlying muscle tissue. The uvula is reflected backwards and sutured to the soft palate. 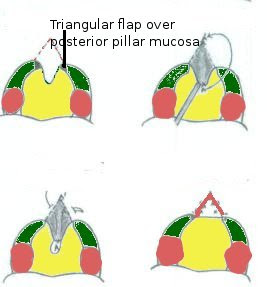 Diagram showing the steps of triangular uvulopalatal flap
Advantages:
Posted by Unknown at 3:15 AM